In November, the new Government threw out the dreadful ‘Pay Equity and Equal Pay’ bill that was introduced by the previous Government. That bill did away with the 1972 Act which Kristine Bartlett and unions used to win equal pay for caregivers. It also introduced new barriers to women accessing true equal pay, by making it harder to find the best ‘comparators’ - equivalent male-dominated work - and saying that women would have to meet ‘market tests’. It also threw new hurdles at women to have to ‘prove’ they were being undervalued. None of these things were agreed by the tripartite union, Government and business Joint Working Group (JWG) that recommended a set of pay equity principles to make equal pay real.

Now we have a chance to pick up where Kristine Bartlett’s case left off, dust off the agreed pay equity and equal pay principles that set out a good process on how to negotiate a fair rate, and modernise the 1972 Act by putting the principles into law.

Unions are optimistic about the chances of success. Groups of women who have already lodged claims or started negotiations include:

- The Public Service Association (PSA) and E tū have been progressing a pay equity claim for around 3,500 mental health and addiction staff who were wrongly left out of the care and support settlement by the last Government to cut costs, despite doing very similar work. The Minister’s confirmation that the Government is keen to resolve this claim is welcome news.

- The New Zealand Nurses Organisation (NZNO) has been offered terms of reference for negotiation of their pay equity claim by the District Health Boards (DHBs) as part of their collective agreement negotiation process for 27,000 members. They are continuing to mediation early next year for the collective agreement negotiations. The DHBs’ offer to use the agreed equal pay and pay equity principles is a really good sign.

- The New Zealand Educational Institute (NZEI) is negotiating with the Ministry of Education over the claim they lodged with the Employment Relations Authority (ERA) for education support workers in 2016. NZEI has also lodged a claim for early childhood teachers and staff across both the public and private sectors.

- The PSA is in ongoing discussions over their 2015 claim on behalf of social workers employed by Oranga Tamariki (formerly Child Youth and Family). They have also been meeting with the DHB advocates Shared Services to discuss their equal pay claim for admin and clerical workers.

There is also ongoing work between unions and the State Services Commission on equal pay principles for work which is not female-dominated, but is not gender-equal because of issues like parental leave, starting salaries, progression and promotion which contribute to unequal pay. The next step is carrying this work into the private sector.

Despite all this promising progress, eliminating unfair pay for women in New Zealand isn’t a done deal yet. There is still a parliamentary process to get a good and fair law that actually puts the money women are already legally owed in their pockets. The first step for this is fast-tracking putting the agreed equal pay principles into the Equal Pay Act.

You can help this happen by showing your political support for a good law here. 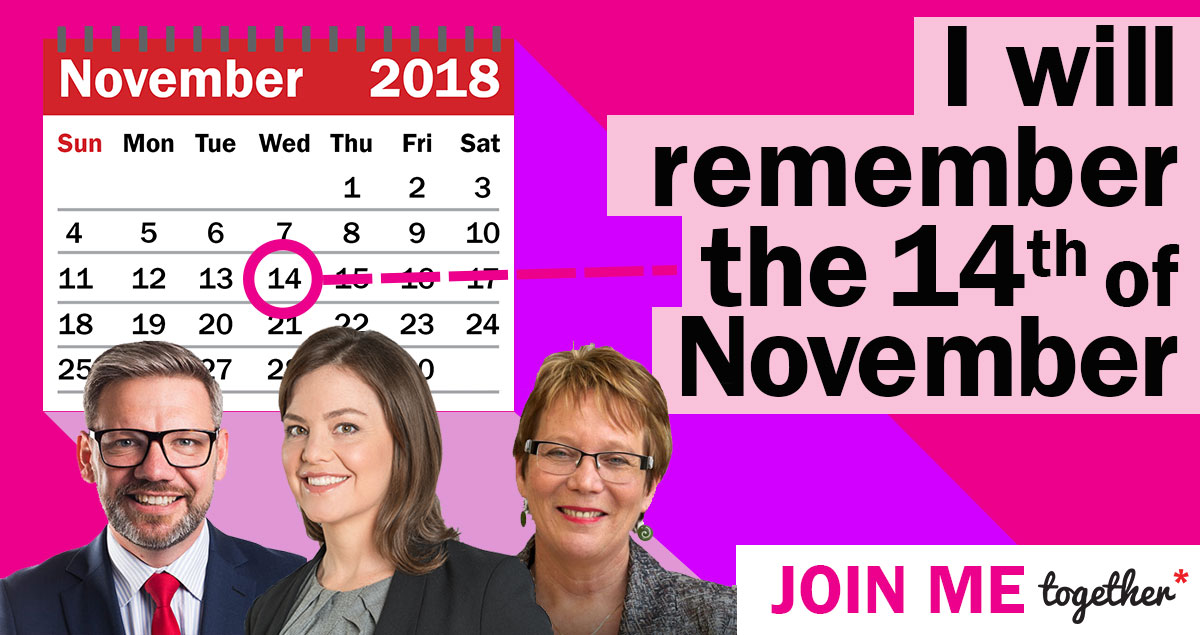 We reckon the politicians can do it before the 14th of November 2018- the day this year that women in New Zealand effectively started working for free because of unequal pay.

The Government needs to set enough money aside in the upcoming budget to pay women employed in schools, hospitals, and other public service roles fairly for the work they do. The Minister for Women, Julie Anne Genter has pledged to fix the gender pay imbalance in the core public service by 2022, but our nurses, teachers and support workers aren’t included in these ‘core’ roles. Women shouldn’t accept anyone telling them to sit politely and wait even longer for the money they are legally entitled to now because ‘things are a bit tight’. The fact is, budgets have been ‘a bit tight’ for these women and their families for over 40 years!

2018 is going to be a busy year for equal pay. We’re going to get better law, more resources and we have more political support than ever to eliminate unequal pay. The union movement has been deeply committed to this goal for a century. To win, we’re going to need New Zealanders standing up for equal pay with us. If you support equal pay for women, please let us know you have our backs by signing on to the campaign here. Let’s make New Zealand the best place in the world for women to be in paid work, together.

Liked what you just read? To keep up to date with working people's views on equal pay, wages, politics and more join us here and follow us on Facebook.